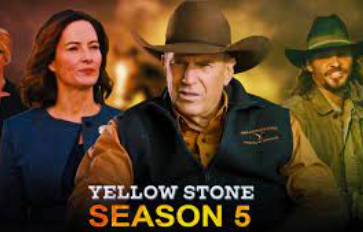 Yellowstone follows the life of the Duttons, a family that owns the largest ranch in Montana. John Dutton, the family patriarch is played by Kevin Costner, while the characters of his daughter Bethany and son Jamie, are portrayed by Kelly and Wes Bentley respectively. The cast of Yellowstone also features Luke Grimes, Gil Birmingham, Danny Huston, Cole Hauser, and Kelsey Asbille along with Teeter played by Jen Landon and Emily by Kathryn Kelly.

Season 4 was concluded in January 2022 and was a big hit among the fans. The fans are looking forward to Season 5 and expect Season 4’s cliffhangers to be addressed there. There are questions about Jamie’s political future, Warner’s upcoming moves against Beth and Dutton land and Kayce’s mysterious vision quest among many more which are expected to be answered in Yellowstone Season 5. The show has amassed popularity since its premiere in 2018 and became one of the most watchable shows on television in 2021. Yellowstone amassed a viewership of 10.3 million during its fourth season.

Its first season was premiered in June 2018 on Paramount Network. The makers announced in February 2022 that the show will be renewed for its fifth season.

According to Variety, Glasser stated that filming for Yellowstone Season 5 will begin in May 2022, with the show returning in the fall of 2022.

Yellowstone’ season 5 is the biggest season yet

The first season of the Kevin Costner-led drama featured just nine episodes. While Yellowstone seasons two through four featured 10 episodes each. Now, the Wall Street Journal is reporting that Yellowstone season 5 will be bigger than ever.

The new season will have a whopping 14 episodes. But Paramount is supposedly splitting the super-sized season into two halves, with seven episodes each. And rumor has it that the first half of the season will premiere in late summer. If that’s true, the hiatus between seasons 4 and 5 will only be half as long as the previous break.

The hasty schedule is a result of Sheridan’s new $200 million deal with Paramount, and the massive ratings of the Yellowstone season 4 finale. Which scored nearly 15 million viewers.We want to double down on that momentum and not waste it,” Chris McCarthy, chief executive of ViacomCBS Media Networks and MTV Entertainment studios, explained.

According to reports, Executive Producer David Glasser has confirmed that the drama series has been renewed for the fifth season. However, Yellowstone Season 5 release date is unknown. Variety reports that Glasser hinted that the production for Yellowstone Season 5 will begin in May 2022 and the show is expected to return sometime around fall 2022.

He stated – “It’s the prime of the show, I think the show is still maturing, and there’s still a lot of stories to tell. I know with [show creator Taylor Sheridan], he’s got a lot to say and a lot to write. He’s deep into season 5 of Yellowstone now. He’s got some incredible ideas that he shared that I think audiences are going to be really excited about.”

Although the show was renewed for season 5 in 2021, there aren’t many confirmed announcements about the same. Recently, the makers had announced that the show will be divided into two segment but it is not confirmed whether the season 5 will release in parts or the makers were referring to the general plot division on the show. The show is expected to release sometime in the fall of 2022.

In February, Paramount confirmed that season 5 is will feature 14 episodes, split into two parts. The first “chapter” is tipped to air sometime in summer 2022

Yellowstone season five has further caused excitement in the fans as it will be coming back to the screens all new and improved with all of 14 episodes, divided into two chapters. Season five Chapter one will reportedly be on our screens in the early summer of 2022 as hinted by the executive producer David Glasser.

Is season 5 the last season of Yellowstone?

Yellowstone season 5 is expected to be released sometime in early 2022 or late 2023 – and there’s a chance that this could be the show’s final season.