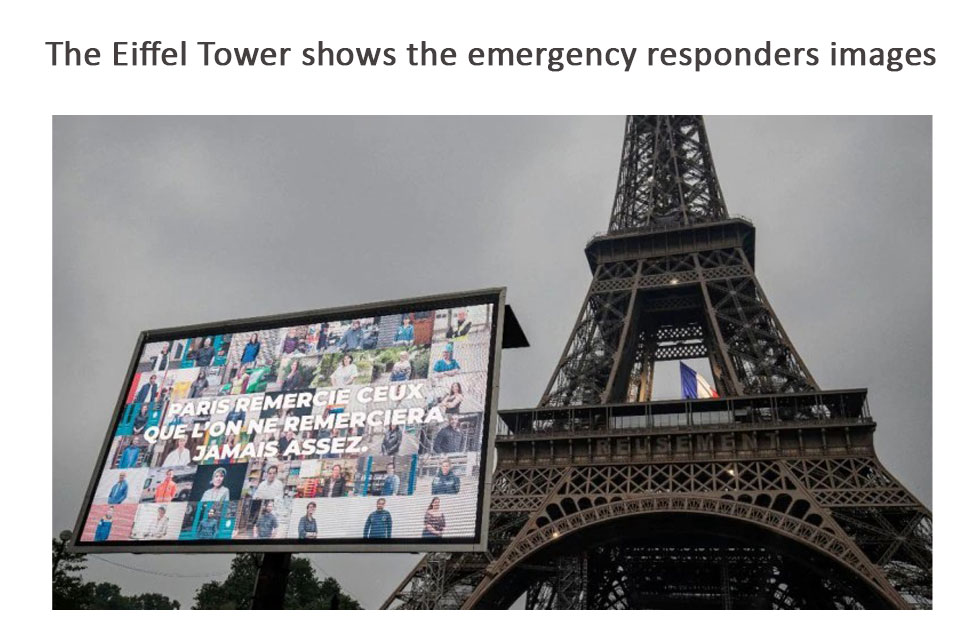 The Eiffel Tower is located in Paris, France. It is the wrought iron lattice tower on the Champ de Mars. That tower designed and built by Gustav Eiffel, an engineer. This tower named the Eiffel Tower in honor of him.

It built at the gateway to the 1889 World’s Fair from 1887 to 1889. It has become a global cultural icon in France. And also it is one of the most recognizable structures in the world. This is the most visited monument in the world. In 2015, 6.91 million people visited it.

Eiffel Tower is the second tallest freestanding structure in France after the Millau viaduct.

The Eiffel Tower displayed the portraits of nurses, doctor’s and essential worker’s images in Paris on May 10. Because of tribute to the front’s emergency responders during the outbreak of the Coronavirus.

A giant screen installed in front of the Eiffel Tower. The pictures of emergency workers displayed with the message “Thank you, you were there.”

This tribute was giving them before France released the lockdown with the reopening of shops, factories, and some schools.

77 people are talking about this

The Eiffel Tower paid tribute to healthcare workers in March with showing a message “stay home.”

Lights on the Paris landmark shown as “Mercy.” Its mean is the “Thanking you in a tribute to emergency responders”.

Paris Mayor Anne Hidalgo said in March that, the 324-meter-high tower held on the light shows every evening.

After the infection rate reduced, the French lock lifted.  More than 26,000 people died in France due to Covid-19.