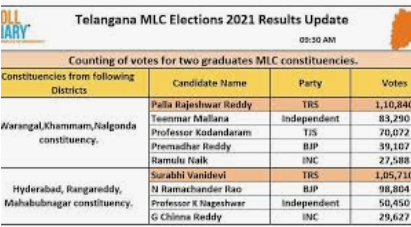 Elections to six seats of Telangana’s legislative council were largely peaceful on Friday with 96.7% of the voters cast their vote. The voters are municipal corporators, councillors, zilla parishad territorial constituency (ZPTC) and mandal parishad territorial constituency (MPTC) members. The 5,326 voters will decide the fate of 26 candidates when results are declared on December 14 .

Only Karimnagar town where, TRS rebel candidate and former mayor Sardar Ravinder Singh is contesting and is supported by the BJP, saw minor altercations.Of the 12 MLC vacancies notified by the Election Commission of India, six were elected unopposed. These are one each in Nizamabad and Warangal and two each in Mahbubnagar Ranga Reddy. Polls have been held for Medak, Adilabad, Nalgonda, Khammam and two seats in Karimnagar. Congress candidates are in the fray in Medak, Khammam and Adilabad.

Amid fears of poaching and cross-voting, almost all the elected representatives belonging to TRS voted on Friday. The TRS elected representatives were brought to the polling stations in special buses accompanied by respective district ministers.Although voting began at 8 am, TRS voters reached the polling stations at around noon in some districts after going through mock polling to understand preferential voting as majority of them were first-timers. Some ex-officio members like MLAs, MLCs and MPs, who got voting right for the first time, used their franchise.

Among the candidates, sitting MLCs T Bhanuprasad Rao from Karimnagar, Yadava Reddy from Medak, and MC Koti Reddy from Nalgonda are in the fray. Ruling TRS has also fielded L Ramana, who joined the party from TDP recently. He is contesting from Karimnagar. State ministers Indra Karan Reddy, Harish Rao, Jagadeeswar Reddy and several MPs cast their vote. Ministers said that they are confident of a TRS victory in all the six constituencies.

Notwithstanding the hype around the MLC polls and fears of poaching and cross voting, TRS president and chief minister K Chandrasekhar Rao, Telangana BJP president Bandi Sanjay Kumar and a couple of MPs and MLAs did not cast their vote in the elections on Friday.This time, the Election Commission of India (ECI) provided the voting right to ex-officio members like MPs, MLAs and MLCs in the MLC local authorities constituency elections.

KCR, who represents Gajwel assembly constituency and has a vote in the MLC election, stayed away from voting in Medak local authority constituency poll. Similarly, Sanjay and BJP MP from Adilabad Soyam Bapu Rao did not turn up for voting. Counting of the votes will take place on December 14.

BJP MLA Eatala Rajender did not get the voting right as he was not elected from Huzurabad at the time of preparation of voter list for the MLC elections. Even Congress MPs and MLAs too did not exercise their franchise. Nalgonda MP N Uttam Kumar Reddy and Munugode MLA Komatireddy Rajgopal Reddy did not vote. Another Congress MLA from Manthani D Sridhar Babu also stayed away from voting.