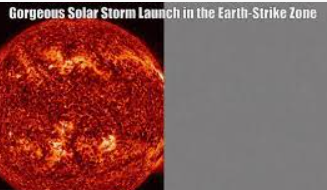 The two agencies said that the resultant geomagnetic storm will hit Earth on Thursday (April 14).Also, taking to Twitter, the Center of Excellence in Space Sciences India (CESSI) shared the details of this upcoming storm. “A halo CME was detected by SOHO LASCO on 11 April. Our model fit indicates a very high probability of Earth impact on 14 April 2022 with speeds ranging between 429-575 km/s+,” the CESSI tweet said.

Earth’s magnetic field is poised for impact as a coronal mass ejection from the Sun hits the planet on Thursday. The impact will trigger a minor to moderate geomagnetic storm on the planet kicking off auroras and likely causing radio blackouts in some parts of the world. The massive surge of plasma is coming towards Earth at a staggering speed of 16,13,520 kilometers per hour.

The highly energised material was hurtled into the vacuum of space from a dead sunspot, AR2987, which had suddenly become active. According to the US-based Space Weather Prediction Center, the solar flare will lead to a GS class geomagnetic storm on April 14 that could cause a radio blackout.

Geomagnetic storms are a major disturbance of Earth’s magnetosphere that occurs when there is a very efficient exchange of energy from the solar wind into the space environment surrounding Earth.

The impact is likely to continue on April 15 as well, when the American center has predicted a minor geomagnetic storm around the planet that could cause some issues in weak power grids.

According to space agencies across the globe, the Sun is about to strike the Earth with a massive solar geomagnetic storm as soon as tomorrow. With the activity of the Sun significantly ramped up, there are projections that this geomagnetic storm can be dangerous.

A solar geomagnetic storm basically means that the Sun is about to discharge significant amounts of Coronal Mass Ejection with high-intensity energy toward the Earth, and some of the other planets on the internal solar system, on Thursday.

NASA and NOAA have been tracking the emission of CME by the Sun and have predicted that the storm can hit our planet on April 14. NASA has further predicted that after the mega-storm hits Earth, it is likely to intensify due to the very fast solar wind stream.

In a tweet, the Centre of Excellence in Space Sciences India (CESSI) said, “Our model fit indicates a very high probability of Earth impact on April 14, 2022, with speeds ranging between 429-575 km/s. Low to Moderate geomagnetic perturbations are expected. Currently, solar wind and near-Earth space environmental conditions are returning to nominal levels.

What Is A Geomagnetic Storm?

A geomagnetic storm is a major disturbance in the Earth’s magnetosphere (area of space around a planet, that is controlled by the planet’s magnetic field) which occurs when there is a very efficient exchange of energy from the solar wind into the space environment surrounding Earth. Variations in the solar wind produce major changes in the currents, plasmas, and fields in Earth’s magnetosphere, which, in turn, result in geomagnetic storms.

What Is A Coronal Mass Ejection?

Coronal mass ejections or CMEs are large expulsions of plasma and magnetic fields from the Sun’s corona, or the outer solar atmosphere.

These large clouds of solar plasma and embedded magnetic fields are released into space after a solar eruption.

How Could A G2-Class Or Moderate Geomagnetic Storm Impact Earth?

For instance, high altitude power systems may experience voltage alarms, according to SpaceWeather. Transformers may be damaged due to long-duration solar storms.

Since the solar storm can impact spacecraft operations, ground control may have to perform corrective actions to properly orient different spacecraft.

The geomagnetic storm can also cause high frequency radio propagation to fade at higher latitudes.

The disturbance in Earth’s magnetosphere can result in breathtaking auroras in regions located at lower latitudes, such as New York and Idaho.

What is a solar storm and what does it do?

A solar storm is a disturbance on the Sun, which can emanate outward across the heliosphere, affecting the entire Solar System, including Earth and its magnetosphere, and is the cause of space weather in the short-term with long-term patterns comprising space climate.

What causes a solar storm?

Solar Storms occur when the sun is at its peak solar activity. The sun shoots out boiling hot plasma in the form of solar flares and winds. This includes huge bursts of charged particles that are released from the sun’s atmosphere straight into space.

How do solar storms affect humans?

How solar storms impact human health? Solar storms emit radiations, exposure to which is harmful to humans and can cause organ damage, radiation sickness and cancer. Most experts state that there’s no significant risk to humans on the ground from solar flare.

But the resultant solar storm is the real danger that looms over planet Earth. And to be honest, it is still not enough to kill on the planet, but it is capable of destroying all the satellites around the Earth, knockout power grids and all forms of communications, even the Internet.