Popular Punjabi singer and rapper Sidhu Moosewala joined the Congress onin the presence of Chief Minister Charanjit Singh Channi and PPCC chief Navjot Singh Sidhu.Moosewala, after being taken into the party fold, said he had started his music career four years ago, but was now ready to take a new step in his life. “I still Iive in the same house in my village. My father is an ex-serviceman and my mother is a sarpanch. Residents of my area, Bathinda and Mansa, are associated with me. They have expectations from me.

Sidhu Moosewala, a controversial singer known to flaunt guns and police cases in his song videos, joined the Congress today in the run-up to the Punjab election early next year. Both Punjab Chief Minister Charanjit Singh Channi and state Congress chief Navjot Singh Sidhu welcomed him aboard.The Punjabi rapper is likely to contest the polls from Mansa, his hometown. 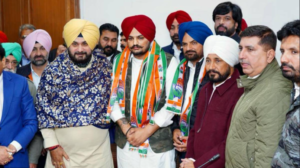 Sidhu Moosewala, 28, faces many cases that accuse him of glorifying guns and violence through his songs. But Navjot Sidhu stonewalled questions on the subject.Why are you asking about issues which are subjudice? Let the people of Punjab decide about him. The media should not decide,” Mr Sidhu told reporters.Chief Minister Charanjit Singh Channi added: “He has won the hearts of everyone. He is a son of a farmer and his father is an ex-army officer. I am sure he will make Congress party proud, I welcome him on behalf of Congress.”

WHO IS SIDHU MOOSEWALA?

Sidhu is an engineering graduate. He learnt music during his college days and later moved to Canada. He started his journey in music by writing a song — ‘Licence’ — which was sung by Ninja and ultimately kicked off his career as a songwriter and singer. Moosewala has a fan following, running into millions and is popular for his gangster raps.

Sidhu Moosewala is also known to be one of the most controversial Punjabi singers. He has on multiple occasions been criticised for openly promoting gun culture, glorifying gangsters in provocative songs.

His song ‘Jatti Jeonay Morh Di Bandook Wargi’, released in September 2019, had kicked off a controversy over a reference to 18th-century Sikh warrior Mai Bhago. He was accused of showing the Sikh warrior in a poor light. Moosewala had later tendered an apology.

Sidhu Moosewala, whose favoured theme is to depict the charms of bucolic life in his videos, has also been accused of glorifying caste divides. His “gangster rap” has a sizeable fan following.

He belongs to the “Moosa village” in Mansa and his mother is a village sarpanch.

Responding to media questions, he said: “This is my first press conference. Just three years back I started singing. Now four years later I am taking a new step. Mansa is not that developed… a part of this area raised me, so I will raise my voice from here.”