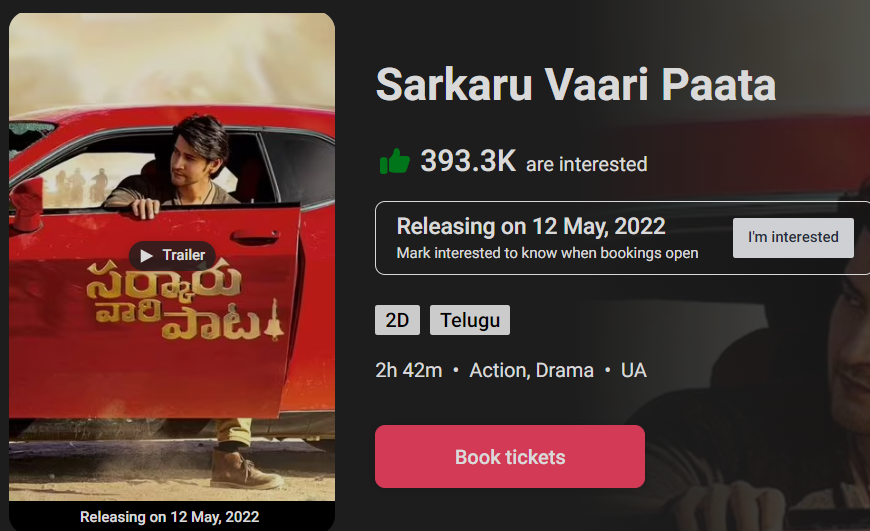 Meanwhile, ticket bookings for the Mahesh Babu-Keerthy Suresh film have opened up in a phased manner across the Telugu States and the world. The film has already received a U\A certification by the CBFC on Friday and the same was shared by the SVP makers on Twitter,

In andhra pradesh, the problem of movie ticket prices has recently been a major topic. The state government is only permitting ticket prices to be raised for films with a budget of more than Rs. 100 crores (excluding remunerations). It has recently allowed films like Radhe Shyam, RRR, and acharya to get a boost. Despite failing to meet the conditions, acharya was allowed a ticket pricing increase.

Now, Mahesh Babu’s sarkaru vaari paata has also been granted permission to raise ticket prices. The government issued a directive to that effect. The government of andhra pradesh allowed all theatres in the state to raise ticket prices by Rs. 45. The hike is appropriate for all classes. The producers are pleased with the government’s increase. The reservations have started on a sour note, according to reports, due to Acharya. Meanwhile, it is likely that the telanganagovernment will approve a ticket price increase for this film. sarkaru vaari paata is scheduled to be released on May 12th.

This comes after the Andhra Pradesh government permitted filmmakers of blockbusters RRR and Chiranjeevi starrer Acharya to hike the ticket prices earlier this year.

According to a report in Telangana Today, the state government has increased the existing ticket prices for Sarkaru Vaari Paata by Rs 45 per ticket. However, this hike in the price has been allowed only for 10 days from the release date of the film.

The filmmakers of Sarkaru Vaari Paata have been given the nod for a ticket hike as the film falls in the Super High Budget category. As per the Andhra government, this is the category of films having a budget of more than Rs 100 crore. Notably, the remuneration of the director and the lead cast is not taken into consideration while categorizing the films.The state government has announced that the increase or decrease in the ticket prices will depend on the budget of the film, as per the recent amendments to the Cinematography Acts in Andhra Pradesh.

The grand pre-release event of Mahesh Babu’s ‘Sarkaru Vaari Paata’ is scheduled for May 7 as the film is locked for a May 12 release. The makers have begun promoting the film vigorously.

The pre-release event will take place on May 7 at the Yousufguda Police Grounds in Hyderabad. The same will be confirmed by the creators in the coming days. The event will be a black-tie affair, but there has been no update to the list of guests yet.

The Andhra Pradesh government headed by chief minister YS Jagan Mohan Reddy has given good news to the ‘Sarkaruvari Pata’ film unit allowing the increase in the price of movie tickets. As it is a big budget movie, the government has issued orders adding the option of charging an additional Rs. 45 on regular ticket rates for the first 10 days.