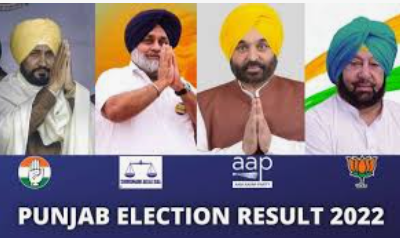 The Punjab Assembly Elections Result 2022 were held on February 20 instead of February 14 on account of Guru Ravidas Jayanti. There are 117 seats in the Punjab Assembly. This year for these 117 constituencies, 1304 candidates were in the fray. It was an intense battle between the incumbent Congress, the BJP, Akalis and the Aam Aadmi Party, which is trying to shed its regional player tag. This year, despite much efforts by the poll panel, the turnout was much lower in comparison with the 2017 tally.The big names that will be in focus for this year’s Punjab Assembly Elections 2022 are current Chief Minister Charanjit Singh Channi, AAP’s Bhagwant Mann, ex-CM Captain Amarinder Singh, Congress leader Navjot Singh Sidhu among others.

As we have told you earlier, the counting process at all the designated centres will begin at 8 am on march 10 tomorrow. Early trends of the results will start appearing on the official website of the Election Commission of India’s official site only after an hour i.e 9 am. It should be noted that the first hour of the counting of votes will be dedicate to the ballot papers. Only after that the electronic voting machines will be opened for the counting of the votes.

Punjab Election Exit Results 2022 Updates: All top media organisations have released their exit poll surveys for Punjab. All of them say AAP would cross the majority mark in Punjab this time, which saw a multi-cornered contest between 5 big parties.

Punjab elections 2022 saw a multi-cornered contest during the Assembly elections this time. Key players like Aam Aadmi Party (AAP), Shiromani Akali Dal-Bahujan Samaj Party alliance, and the Bharatiya Janata Party-former chief minister Amarinder Singh’s Punjab Lok Congress party will be keenly looking at exit poll surveys as they’ll reflect the mood of the state people. According to various poll pundits, Aam Aadmi Party looks like a serious challenger this time, which could hurt the prospects of the ruling Congress in Punjab. Political parties had fought polls on the agenda of unemployment, drug abuse, development and corruption.