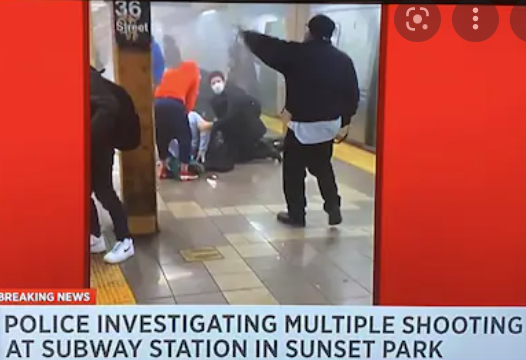 The police have described the suspected shooter as a man about 5 feet 5 inches tall and weighing around 180 pounds.According to the police, the gunman acted alone and that investigation is on to find the motive of the suspect. However, the all-out manhunt for the gunman is the investigators’ top priority, they said.A suspect fled wearing an orange construction vest and a gas mask, according to the police, who are on the lookout for the gunman.

Horrifying visuals from the scene show people tending to bloodied passengers lying on the floor of the station, where train services have been delayed during the morning rush hour.The attack appears to have happened on the southbound R train, beginning at 25th St station. As the doors closed, the suspect threw smoke bombs and opened fire. The victims then got off the train at 36th St station.

Several people were shot at in a subway station in New York’s Brooklyn today. People tweeted photos showing commuters with blood on their clothes being helped by others, as they sat with their back to a metro train. At least 13 were injured, the New York Fire Department said.

The New York Police Department, or NYPD, tweeted, “Due to an investigation, avoid the area of 36th Street and 4th Avenue area in Brooklyn. Expect emergency vehicles and delays in the surrounding area.

Shooting in subway comes amid rise in gun violence across the city.

Multiple people were shot in the subway system in Brooklyn during the Tuesday morning rush, officials said, a violent episode that came amid fears about public safety as New York City struggles to recover from the pandemic.

A senior law enforcement official said that the police were seeking a heavyset man with a gas mask and an orange construction vest who had been wearing a dark blue outfit that appeared to resemble that of a transit worker.

The official said that investigators believed that a smoke bomb went off and that the gunman had shot from inside a subway train. Videos posted on social media showed panicked riders pouring from a train and onto a platform at 36th Street as smoke billowed through the station.

A Police Department spokesman said that no active explosive devices had been found at the scene.

The area around the station was surrounded by investigators and cordoned off.

On Fourth Avenue near 35th Street, dozens of police vehicles with flashing lights stretched down at least four blocks. Officers blocked traffic as residents stood in small groups huddled on the sidewalk, seeking cover from the rain. At least two helicopters flew overhead.

“We saw an ambulance coming out with a stretcher with a person on it,” said Silvana Guerrero, 20, who works at nearby Sunset Bagels Cafe & Grill. “Their leg was injured — I’m not sure exactly what went on or what was going on. And then, we saw after that, two ambulances coming out, with two people, like, hopping on one leg.”

President Biden had been briefed on the shooting, officials said. Mayor Eric Adams, who tested positive for Covid-19 on Sunday, was also monitoring the situation.