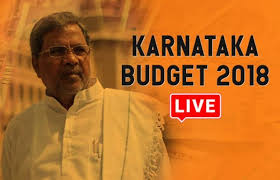 * ‘Media Sanjivani’ will be given a group insurance facility to the journalists so that in case of death due to accidents or casualties, the insurance cover of upto Rs 5 lakh can be provided to the deceased’s family.

* At the cost of Rs 2 crore, ‘Forgiveness Fund’ will be set up for the welfare of the news distributors, who distribute newspapers and are living a life of uncertainty. * Karnataka has made a great achievement in protecting the wild life species. As a result, Karnataka is the first in the country in terms of tigers, elephants, wings and leontoned maize: Chief Minister

* Steps have been taken for conservation of wildlife by adding 1,42,500 hectare forest area in protected area network: Chief Minister

* Forgive the penalty on property taxes for industries in industrial areas and townships, if principal is paid in the same installment

* More Air Quality Monitoring Stations will be set up in Karnataka to tackle pollution.

Large scale afforestation program should be started on the banks of the rivers in the state: Siddaramaiah

* A Wentened Dam by Planning West Bengal in the Southern Kannada District: Siddarama

* To see the burner stove in the afternoon of the state government and to see two refill for 30 lakh beneficiaries, State Minister Anil Bhagya Yojana or state government’s free gas connection project

* Government to set up Karnataka Sports University under PPP model

* 25% reservation was announced for backward classes and minority students in the Scheduled Caste / Scheduled Tribe post-matricical hostels;
Rs. 5 lakh for the girl of Devadasi and Rs. 3 lakh incentive for male child of Devadasi.

* An additional 1000 bed wards were announced for Bangalore Medical College

* CCTV cameras will be set up in all government schools in a phased manner for the safety of students.

* Announcement of agricultural loan exemption of Rs. 1 lakh from cooperative banks after the death of the farmer.

* Chief Minister announces loan at Rs. 50000 interest rate of 0% for women and fishermen

* For the benefit of 5.9 lakh government employees and pensioners, almost equal wages, it will add an additional burden of Rs 10,508 crore on the treasury.

The Chief Minister announced the scheme of ‘Raita Belluku’ to benefit the farmers of 70,000 drought land for a maximum of Rs 10,000 per hectare.

* Today there is a hunger in Karnataka; we have a pro farmer government: Siddaramaaya

* I am not an economist, but more than 40 years of political experience has proved that a farmer’s son can do the hard work: Siddarama