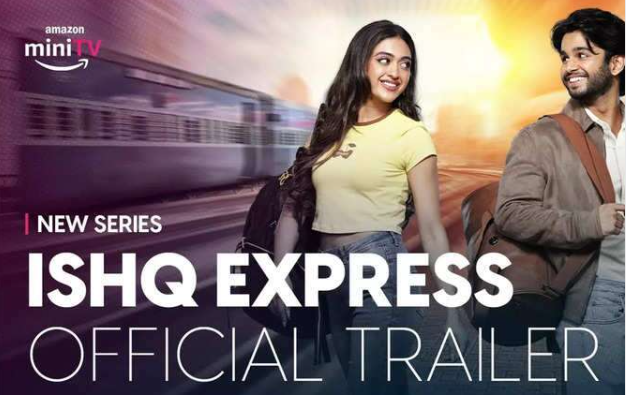 Amazon miniTV’s Ishq Express brings you a relatable young-adult romance involving strangers Aarav (Ritvik) and Tanya (Gayatrii), who meet on a train, chat, and bond. The surprisingly strong connection of two young co-passengers continues even after deboarding the train. From conversations to pass time masti, the intriguing plotline of Ishq Express will take every audience relive memories of that ‘special’ co-passenger.

The OTT platform Amazon miniTV has announced its next mini-series, Ishq Express. The romantic show features Ritvik Sahore and Gayatrii Bhhardwaj in lead roles. The makers have released a trailer for the upcoming show and it looks interesting.

The trailer of Ishq Express shares glimpses of the love story of Aarav (Ritvik) and Tanya who meet while boarding a train to their hometown. What follows is a cute love story with the duo entangled in mutual, yet unspoken feelings for each other without any pretence, judgement, or any inhibitions. While Aarav develops feelings for Tanya, she does not reciprocate. Will the two reunite or Aarav be left heartbroken is what needs to be seen.

Girish Prabhu, Head of Amazon Advertising, said in his statement: “Ishq Express is a beautiful story of two young adults who will take audiences on a breezy romantic journey. Every train journey is special, and this new series will have every viewer relive those special memories. Ishq Express promises to be a fun ride and we look forward to the reaction of our viewers.”

Written and directed by Tanmai Rastogi & Saurabh George Swamy, ‘Ishq Express’ is a beautiful story about two strangers who meet on a train journey and become entwined in each other’s lives. What follows are their conversations, which begin awkwardly and progress to a better understanding of one another.

The story is predictable as most generic romantic dramas, but what sets it apart is the way it is told — in a simple and realistic manner. As a result, the freshness of this drama is sure to win brownie points with the audience for its originality as the story keeps you engaged.

“Journey is over, but the story isn’t,” says one of the series’ quotes, and this perfectly sums up the premise of this three-part miniseries. The story revolves around Aarav, a quintessential small-town boy who is trying to blend in with the big city of Mumbai. He has no set plans for the future, but when he meets Tanya for the first time, his world is turned upside down.