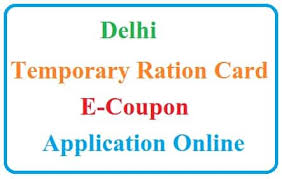 Amid prevalent chaos and uncertainty over access to the essential services and commodities during the lockdown, we bring you the latest updates from Delhi.The Citizen living in Delhi can apply for the Temporary ration card which will be issued by the Department of Food, Supplies and Consumer Affairs for lockdown period.People can apply online for Temporary Ration Coupon in Delhi by making registration at the official website of Delhi government. The current Chief Minister of Delhi, Arvind Kejriwal has taken similar measures. The latest government scheme will enable the poor and non-ration card holders to obtain food grains from ration stores, at low prices. An official report suggests that there are around 71 lakh applicants in this area who have ration cards. The Delhi government does not issues ration cards to the residents who are not permanent residents of this area. For them, the Temporary Ration Coupon scheme has been implemented.

In a move towards helping needy people in the national capital amid lockdown imposed across the city, Delhi Chief Minister Arvind Kejriwal on Tuesday announced free ration for the next two months to 72 lakh ration card holders.Kejriwal, however, clarified “it doesn’t mean that the lockdown will continue for the next two months”, expressing hope that the restrictions will be lifted soon after the Covid cases reduced.

The Aam Aadmi Party’s (AAP) national convenor also announced an economic support of Rs 5,000 each to all the auto and taxi drivers in the national capital whose income has suddenly stopped since the lockdown was imposed in the city.

Under the Delhi government’s move, Kejriwal said a total of 1,56,000 drivers will be covered. “These are those drivers who were provided a similar amount during the lockdown imposed for the first time in Delhi.”The Chief Minister said the amount, however, will not be sufficient for the drivers but “it will surely help them economically during the crisis”.