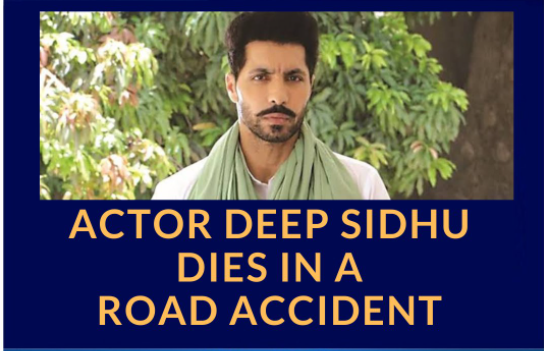 Mr Sidhu was going from Delhi to Bhatinda in Punjab when the SUV in which he was travelling rammed a trailer truck at 9:30 pm on Tuesday, the police said.Hospital authorities said he was brought dead.Punjabi actor and activist Deep Sidhu, who shot into the limelight following the Red Fort violence during the farmers’ rally on Republic Day last year, died in a road accident on the Kundli-Manesar-Palwal (KMP) highway near Sonepat on Tuesday night.

Virender Singh, DSP, law and order, Sonepat, confirmed that Sidhu died when his vehicle rammed into the rear of a truck.Police said the incident was reported around 9 pm near Peepli toll booth on the KMP, in Haryana’s Kharkhoda area, when Sidhu and his friend, a Punjabi actress, were on their way to Punjab in a Scorpio.

A senior police officer said the vehicle hit the back of a stationary truck which had broken down on the side of the road. The driver’s side of the Scorpio bore the brunt of the impact.

A day after last year’s Republic Day farmers’ protest, which had spiralled into violence in the national capital, Delhi Police had registered 25 FIRs against farm union leaders and protesters for allegedly storming the Red Fort and vandalising property.

Punjabi actor Deep Sidhu passed away on Tuesday, February 15 at the age of 37 when he met with a road accident near Sonipat in Haryana. The actor was earlier named as an accused in the 2021 Red Fort violence case. Deep was declared brought dead at the Kharkhoda Hospital in Haryana’s Sonipat.

A tweet from news agency ANI confirmed the news. “Punjabi actor Deep Sidhu dies in a road accident near Sonipat in Haryana, confirms Sonipat Police. Details awaited. He was also earlier named as an accused in the 2021 Red Fort violence case,” read the tweet.

Reports stated that the accident took place on Western Peripheral Expressway in Haryana. The Haryana Police said that the actor’s car rammed into a standing truck near Pipli toll at Kundli-Manesar-Palwal Expressway. The actor was reportedly accompanied by his partner, Reena Rai.