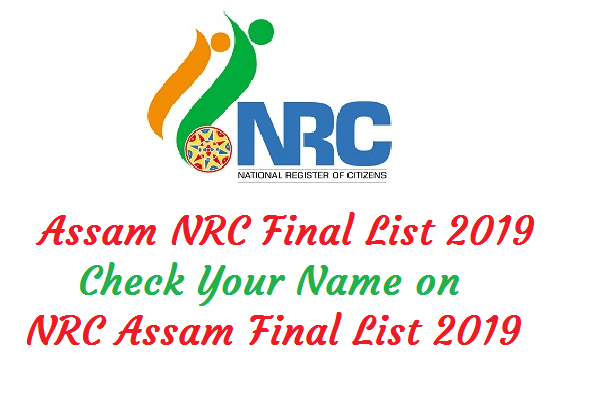 Assam National Register of Citizens Final List 2019 got published. Around 3.29 crore people applied for name inclusion in Assam NRC Final List 2019 on 30 July 2018, the final draft excluded names of 40.37 applicants but now final list excludes 19 lakh people. NRC sets the cut-off date to be a legal Indian citizen as March 24, 1971 which is a date formalized by the Assam Accord.

Over 19 lakh people in Assam have been left facing statelessness after exclusion from the final National Register of Citizens (NRC) list, while 3.11 crore applicants were included in the roster. “A total of 3,11,21,004 persons found eligible for inclusion in final NRC, leaving out 19,06,657 persons, including those who did not submit their claims. While the entire final NRC list has been uploaded on nrcassam.nic.in, hard copies of the Supplementary List of Inclusions are available for public viewing at the NRC Seva Kendras (NSK).The All Assam Students’ Union (AASU) and Assam Public Works (APW) have said they’ll move the Supreme Court over the final exclusion figure.

The final list of updated NRC in Assam left out over 19 lakh people which is almost half of 40 lakh excluded in final draft list published last year. Out of 3.3 cr applicants, a total of 3,11,21,004 persons were found eligible for inclusion in final NRC. This is a list of certified Indian citizens in Assam published after 4 years of implementation.

All the people can check their name in the Assam NRC Final List 2019 through the link given below:-

Here candidates can enter the ARN, captcha and click at “Search” button to check the Supplementary List of Inclusions and Exclusions (Final NRC) under clause 7 of the Schedule to Citizenship Rules, 2003.

This portal will not show results of people who were included in complete draft as on 30 July 2018 AND not excluded by Additional Draft Exclusion List published on 26 June 2019 AND not called for hearings held from 5 July 2019 AND did not have any objection filed against their inclusion.

From 7 September 2019, the status of all NRC applicants will be made available online.