Aarogya Setu App Must For All Private and Government sector employees 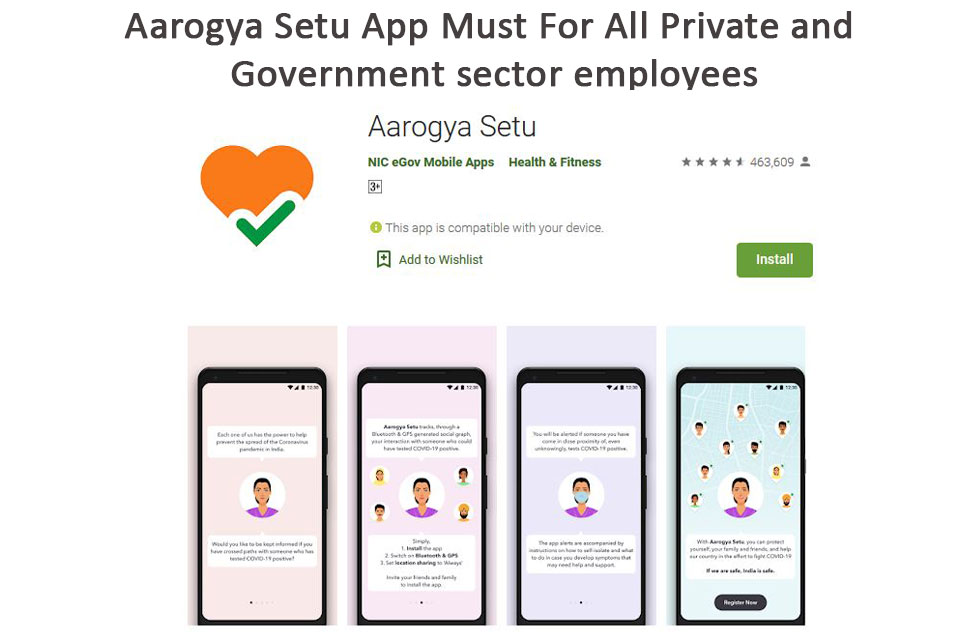 What is the Aarogya Setu App

The Aarogya Setu is a mobile app. It helps citizens to identify their risk of contracting Covid-19 (coronavirus). This app developed by the ministry of electronics and IT. It notched up more than 10 million downloads since its launch five days ago.

You can download this app on a phone both Google Play (for Android phones) and Apple App Store (for ioS). It is available in 11 languages which are 10 Indian languages and English.

Importance of the App

After installing the app, you have to switch on Bluetooth and Location. Then, set ‘location sharing’ to ‘Always.’

It has a tool for self E-testing. That tool asks you a number of questions. In case, some of the answers suggest Covid symptoms, the information will send to a government server. The data will help the government take timely steps and initiate the isolation procedure, if necessary.

It informs you that, if someone came in close proximity with unknowingly tests positive. Also, this app instructs you about how to self-isolate and what to do in case you develop symptoms.

The data is also shared with the government only.

Current usage in the country

According to The Sunday Express accessed data, the app shows the 24 districts with major clusters. It accounted for at least half of the cases across the country. Also, it has 15 million downloads or 18 per percent of the total user base. According to Census 2011 data, the population is roughly 88 million in these districts. This user base is 17 per percent of the population in these zones.

The highest user base is in Delhi. It is 4 million users. Pune has 1.5 million, Mumbai suburban, and Mumbai has 2 million, and Thane has 1.4 million users. There are 62 districts on the red zone had 25 million downloads.

The government designed this to trace all the people who positive would have come in contact with 14 days before case detection. However, this procedure is mostly reliant on positive cases having downloaded the application before they tested positive.

The Home Ministry ordered on Friday for employers, to ensure all their staff downloads this app. Also, he said, the heads of companies will be responsible for their employees who found without the app. It is a part of the Covid Control Plan. But there has, an early barrier among them. That is, many individuals may not have smartphones.

However, this application’s effectiveness depends on its widespread usage.