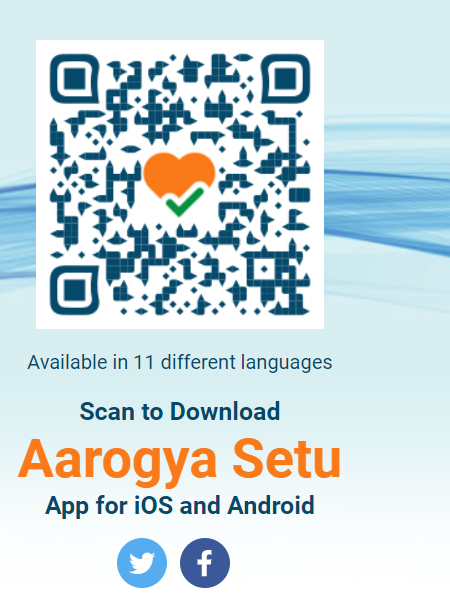 In its bid to drive awareness, installation and usage of the Aarogya Setu app, the ministry of electronics and information technology (Meity) has formally enlisted the help of social media platforms for “outreach purposes” on a “priority basis” in order to reach “all mobile users in India.The Indian government is taking all the possible initiatives such as Aarogya Setu App, launching coronavirus video, promoting social distancing to make the people aware of the novel coronavirus.

The Aarogya Setu tracks users movement and informs them if they have may have come in contact with someone tested positive for coronavirus. To track the movements, the app used phone’s location services. To communicate with other devices, it uses phone’s Bluetooth connectivity. The app collects data and send it to government servers using phone’s internet connectivity. The whole process runs in background and the user is notified if he/she has come in close proximity to coronavirus positive person.

New Update— It’s not just the tech firms that are doing their bit to make users ware about the Covid-19 pandemic by launching new apps, it is also the government that is leaving no stone unturned. The Indian government recently introduced Aarogya Setu app, which uses the location and Bluetooth features of your smartphone to tell you if you are in a high-risk area and even if anyone near you is affected. It is available on Apple App Store and Google Play Store so both iOS and Android users can download it and get started.

You can also head to MyGov.in website, look for Aarogya Setu app, scan the QR code available to download it on your Android and iOS device.

Where is my data shared?

All data is kept with Indian government and is only used for analysis and record making.

How does Aarogya Setu App work?

You can download it from Andriod play store, Apple app store, you can also download it directly from www.mygov.in/aarogya-setu-app.

Is Aarogya Setu APP available only for Android?

No, the Aarogya Setu App is available for both iOS and Android.

What is the Aarogya Setu Seva App?

The Government of India has launched Aarogya Setu, a mobile application aimed to connect health services and we the people of India in our combined fight against COVID-19.